“The struggle for justice does not end when the school bell rings.” – New York Collective of Radical Educators 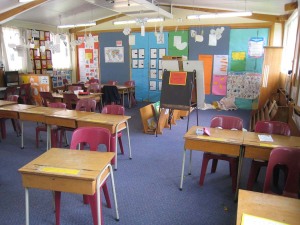 Is education connected to a radical struggle for justice, or distracting us from it?

I recently visited a job fair organized for young and aspiring teachers interested in urban education, after being encouraged to do so by one of my employers. The fair was held in the cafeteria of a wealthy private school on the Upper East Side of Manhattan, and virtually every attendant was a current college student or recent graduate. All the major organizations–TFA, Uncommon Schools, Teaching Fellows–had booths set up around the room, along with six or seven other groups focused in urban education.

After walking around and glancing at some of the various displays, I decided to stop and talk with one woman who was representing an organization I did not know called the Academy for Urban School Leadership. She informed me that the Academy, which is based in Chicago, specializes in “school turnaround,” a buzz-term I recognized but was unfamiliar with. What I learned is that for AUSL, school turnaround translates into firing the entire staff–literally, from teachers and principles to cafeteria and cleaning staff–of a school deemed “under performing,” at which point the school comes under the control of AUSL. AUSL is a private organization which, though it does receive funding from public sources, is governed by a board of directors, most of whom are the high-ranking members of private corporations and business-oriented organizations. The representative proceeded to hand me a small stack of pamphlets which documented students’ raised test scores following AUSL’s turnaround of their local schools, and asked me if I was interested in applying. I told her that what I was interested in was social justice-oriented and radical education, intending to suggesting that the organization did not sound like a good fit. To my surprise, she perked up and replied, “Well, you can’t get any more radical than what we do! We take a school that’s not working and rebuild it from the ground up with the help of students like you!”

This interaction, particularly the statement made by the AUSL spokesperson, struck me as representative of our current moment in education, as we contemplate the future of schooling for oppressed communities. Modeling schools after corporations, trusting private organizations with the dispensing of human rights and resources, purposefully undermining workers’ rights and the unionizing of school staff, and replacing local teachers with those of other geographic, class and ethnic identities are all common trends in urban education, and real concerns which live in this exchange. Yet the statement made by the AUSL spokesperson was specifically telling of what is, for me, an even more concerning trend in mainstream attitudes towards urban education.

That the idea of radical justice could be applied to a project which privatizes, de-unionizes and standardizes the education of oppressed people is terrifying to me, but is also precisely the attitude that anyone pursuing or exploring urban education will encounter. Very much in the model of Obama-era liberal politics, sometimes-undefined terms like “equality” and “social justice” have become mashed up with missionary projects which beseech the wealthy and the formally educated to save poor, brown, urban communities by becoming their teachers. Many of us have become convinced that anything done in the name of “helping” oppressed people must be inherently progressive, opening the door not only for corporate philanthropy in the public sector, but also for a model of learning which is more about relieving the guilt of the privileged than it is about providing accessible, empowering and community-committed education to all people. These models have tricked many of us into falling in line with the most conservative agendas, furthering the plight of poor, working, immigrant and brown people, even as we convince ourselves that we are saving them. Equally, they all define formal education as the key liberating factor for oppressed people, rather than imagining protest and community organizing outside of school as the ways which the needs of our communities should be met.

At a symposium I attended this past semester on Academia and Activism, radical educator Claire Potter noted an enormous uptrend in recent years of college grads pursuing (usually for a limited amount of time) urban education, a shift which has been greatly supported by their alma maters. She stated that where once student movements for social justice had railed against their academic institutions, corporate power and the perpetuating of oppressive economic orders, now what people call social justice are colonial projects which implant the privileged as saviors in oppressed communities, all with the support of private education and the funding of the corporate sector. She expressed a fear that education as an acceptable pathway for the post grads of elitist institutions is actually siphoning energy away from more militant, radical and genuine struggles for justice. The question she asked is the same one I would like to ask of all educators, even those who believe they are beyond the conservative teachings of programs like Teach For America and AUSL: Are more teachers what our communities really need? Is the classroom the only, or even the primary place, where we should fight to manifest justice?

3 responses to “Education, Not Charity: Or; Are More Teachers What We Really Need?”