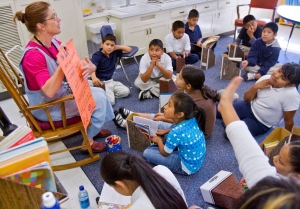 What do radical politics in the classroom actually look like?

The other day, during the last block of time before we broke for lunch, the teacher in whose classroom I am currently shadowing asked his students to describe in their own words what they thought the expectations of their classroom were. The students thought for a moment, then began to raise their hands. A few students offered broad ideas like, “Treat everyone with respect,” and, “Be a good member of the community.” The teacher agreed with them that these were, indeed, all important parts of their community, but said he wanted to push them in their understanding of what he meant by ‘expectations.’ “What do you have to do as a part of this classroom, every day, whether you want to or not?” The students had to think a little more carefully. When they finally began to speak up again, the quality of their answers had changed.

“We have to get all of our work done on time,” said one student.

“We don’t speak when someone else is speaking,” said another.

“We can’t talk when we’re in the halls.”

As the students brought up more concrete exempts of the classroom’s expectations, the teacher began to write them in a list up on the board. He next asked them to think about why these expectations where in place, who they served, and whether they were helpful in maintaining a positive community or not. The students took a moment to write down their ideas in their own notebooks, then returned to discuss their responses together as a class.

A debate quickly broke out as students began to discuss their own positions on the classroom expectations. Some thought the rule about not speaking over others was stifling, whereas others thought it important to make sure that every voice was heard. Some thought being silent in the hall was too strict, while others thought it showed respect to the work being done in other classrooms. That all work should be done on deadline was one rule which most students thought should be challenged, as they argued that there were many reasons why someone might have trouble finishing an assignment, from not understanding the material (a responsibility, they correctly pointed out, which fell on the teacher) to problems at home. At a certain point in the debate, the teacher asked all the students to look back up at the board.

“We can agree,” he said, circling many of the original list of expectations, “that some of these rules can at least be argued to help our community, and that there are members of our community who support them, correct?” Several students nodded their heads. “We as a community, however, seem not to support some of these other ones. Let’s look at one specific one and talk about how we can change it.” He drew an arrow next to “All work has to be done on time.” Students’ hands began to shoot up into the air.

“How about if a teacher didn’t do a good job of teaching the lesson, students shouldn’t have to do it all by themselves for homework.” The teacher wrote this up on the board.

“If a student says there was a problem at home, the teacher should trust them and give them some more time.”

“As long as a student tells a teacher early that they are having trouble, they shouldn’t get in trouble for needing extra time.” The teacher added all of these to the board, stating that from now on, these would be expectations for everyone in the classroom, including himself.

This relatively brief discussion, which happened right before the whole class left for lunch, struck me with how clearly and concretely it made radical politics into a classroom activity. Within it, students were asked to do three things which they are rarely asked to do at any point in their educational careers: To train a critical eye on their own institution, to identify which parts of it were working and which were not, and to offer their own solutions to the pieces which they had identified as defunct or unfair. This exercise, which did not merely demonstrate true democracy but actually attempted to integrate it into the classroom, pushed students to think hard about the institutions which govern their daily lives, and prepared them to find their own voices in calling them out and demanding that they change to suit their current population. And even though, truthfully, many of the revisions which the teacher made were already working policies in his classroom, he created real space for students to take ownership of those policies, making sure that they were relevant to them and that they were understood by students as supporting the kind of learning environment that they wanted to have.

As radical educators, we are constantly confronted with the contradictions in the work that we do, and have to make difficult decisions about how and when we want to challenge the institutions in which we participate. The greatest allies we can ever have in these battles are our students, and the most radical thing we can do is to pose the same questions to them which we are constantly posing to ourselves, seeking their genuine advice and real wisdom, then incorporating it into the structures we all use. Politics which cause us to see our classrooms in new ways are theories. When we move to change the way the classroom actually works and the goals it seeks to meet is when that theory becomes practice, and the classroom becomes a site of concrete change.