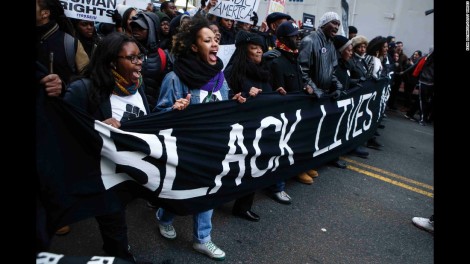 Last month I wrote a response to the song and video ‘Formation,’ after being asked my thoughts repeatedly throughout the week of its release.

I was angry—in ways I couldn’t describe when I expressed myself to friends and family. I felt scared that the revolutionary political efforts I have watched my community raise up over the past two years were being snatched away by powerful economic interests, and that there was little pushback. I feared the huge swell of attention around a song and video was detracting from the battles we were in the midst of fighting.

Yet in a deeper way, a way I didn’t truly understand, I was hurt—hurt that a project being lauded for its femme visibility made me feel invisible. I was hurt that a music video was getting more recognition than the youth, women and queer people in my community, whose immeasurable work had made its creation possible.

The piece I wrote drew a lot of support and a lot of criticism. Many pointed out the pain beneath my response before I realized it was there. More asked why, as a cis man, I felt I had the right to critique the work of a Black woman, adding to the hypercriticism around ‘Formation,’ especially when Black male celebrities making similar statements through similar channels were barely being criticized at all. These were not questions I had asked myself before I started writing.

Others urged me to think more deeply about the bonds between Black women and Black queer culture, noting how often queer cis men have historically borrowed from and been inspired by Black women. A Black woman elder in my community pointed out that, in debates about appropriation, we too often get hung up on ownership—a concept that has historically been used to oppress us—rather than comodification—systems profiting off the cultures meant to dismantle them. Rather than attending to who has the right to do what, she argued, we need to stay focused on how capitalism is using our culture to its own benefit, which is a related but distinct issue. These were all important shifts in my own understanding.

My community called on me to be self-aware, and more conscious of the complex power plays between women and men, culture and consumption, between fear, anger and pain. Their examinations of my own work have given me so much to think on.

In recent weeks I have felt a new kind of rage growing in my community, and in communities of resistance around the country. It is a rage that is bitter, rather than burning. As our sustained political efforts build, so does our exhaustion, the comprehension of how much further we have to go. The pain that, a year or two ago, we began confronting in flashes and outbursts is now something we have been enduring almost without break. Every headline, every meeting, every planing committee, every action, wears on us in ways we don’t always recognize. The shifts in structures feel minute compared to the constant upheaval happening in our neighborhoods, our relationships, and our bodies. And that upheaval can come spilling out, feeling righteous, but resulting in fracturing.

I rarely ask what lies beneath my rage. Maybe I assume I already know, or maybe I am subliminally aware, as James Baldwin once wrote, of the pain I might encounter. Last month, I wrote from a place not of righteous anger, but of hurt I had not stopped to process. I called out a project for making me feel invisible without asking why it felt like such an important moment of visibility for so many other people in my community—especially Black women and femmes.

In my piece I acknowledged that misogyny and racism are real. Yet it is not enough to acknowledge misogynoir if my work is simultaneously contributing to it.

I still think corporate media is a distraction, even when it is driven by Black artists, actors and producers. I still think it is a distraction that can, has been and will be used against us if we are not critical. I think that—while examinations of media can reveal important political lessons (like many of those my community has taught me in the wake of my response)—we can better learn those lessons from each other, in real time, as we organize, support and fight for each other on the ground. I still think our defense of Black women has to be extended, every time, to Black trans women. I still think visibility is not worth the sacrificing of community power. I still think we need to raise up the most vulnerable voices among us. I still think focusing on wealthy, Black celebrities erases the labor for justice that Black people who are not famous are doing every day.

I know there are many in my community who disagree. I respect them, because I know their experiences of Blackness are different than my own, have taught them different lessons than my Blackness has taught me. I am here in the movement to learn from my people, to disagree with care and sincerity, but not to alienate.

The criticisms I received—from those I’ve never met and from those closest to me—have pushed me to return to that truth. I thank them, and thank you.

In love, healing and radical solidarity.

Special thanks to Mariame Kaba and Veronica Morris-Moore

7 responses to “In the Wake of ‘Formation’: Reflections on Misogynoir and Community Healing”