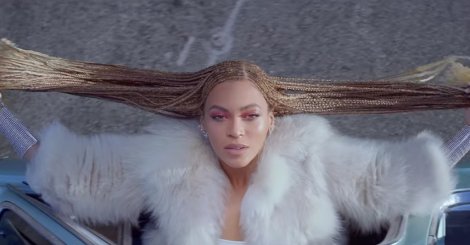 Our obsession with Black celebrity–and our need to defend it–is undermining our movement.

1. I have actively avoided saying anything about Beyoncé’s new song and video. I don’t think they are interesting, important or deserving of my commentary. That as a Black, queer person I have, in the last week, been expected—and, at moments, obligated—to respond to them is insulting and infuriating.

2. Big Freedia is a force. She was used in this project, barely cited and never seen. Black, trans women have given more to popular culture than almost anyone realizes, while they continue to endure inconceivable violence in obscurity. Sampling their style for aesthetic purposes without attaching their faces is not revolutionary. It isn’t even original.

3. As other queer, southern forces have pointed out this week, Hurricane Katrina is not a sexy backdrop. It was a moment in which this country watched a city of poor Black people drown and stood idly by. It was—eerily like the halftime show—a demonstration of our nation’s capacity for mistaking passive consumption of Black struggle with active participation in Black struggle.

5. Bill Gates isn’t just a rich, white, man. He is one of free market capitalism’s most powerful advocates. His foundation has supported multiple projects that undermine unions, affordable education and public schools. His wealth has worked to privatize and gentrify Black communities across this country. Lyrically lauding his achievements is at best thoughtless, at worst sinister.

6. The appropriation of queer and trans genius by straight, cis people is real. As a queer Black person I feel betrayed by straight, cis, Black people who are celebrating this video instead of defending queer art and culture from corporate ravaging.

7. Backup dancers in pseudo Black Panther garb rang as a flippant, even exploitative play on dated Black power movements. It was an insult to our ancestors, and an inability to recognize the current face of Black power.

8. The racist mayor of Chicago has yet to resign. The people of Flint continue to pay for poisoned water, and face a growingly unchecked police state. The officer who killed Quintonio Legreir is suing his estate for emotional distress. Every new think piece about a music video—including this one—deflect energy and attention away from the demanding work of abolition, adding to our complacency with the structures bearing down on us.

9. Misogyny and racism are real. Beyoncé faces these things. She’ll be okay. She has private security, personal transportation and a ton of money. She doesn’t need us to defend her. But we need to defend each other.

10. Celebration and distraction are not the same thing. Taking time to step back from our difficult realities to rejoice, heal and love together is crucial. Investing in corporate fantasies and confusing them with our movements is detrimental.

11. The image of backup dancers holding a sign for Mario Woods was made possible because Black Lives Matter activists ran onto the field and handed the sign to them. The closest thing to an actual solidarity statement happened because local organizers broke through the spectacle of the Super Bowl, not Beyoncé.

12. Non-Black people cheering the corporatizing of Black power may not understand the urgency of the moment we are in, the need to stay vigilant against the diluting of our movement, and the implications for Black communities if our efforts are overtaken.

13. There is a long history of Black celebrities advocating for Black movements. Eartha Kitt, Muhammad Ali, Lena Horne are folks we think of first as athletes and movie stars, yet who used their celebrity to publicly defy the state and advocate for Black communities, at times at great personal risk, and to the detriment of their careers. Do not compare them to Beyoncé basking in the publicity of a halftime show.

14. Beyonce appeared in a straight-up racist video about a week before ‘Formation’ came out. Yes, anti-Blackness is a real issue in Desi communities. So is orientalism in Black communities. Complex though the interplay, the outcome is the irresponsible treatment of South Asian culture and people. There is nothing defensible about that, and nothing new.

15. The Super Bowl—the same as any high corporate festival—displaces the poor, and leads to heightened policing. This year’s Super Bowl was actively protested by San Francisco’s homeless community. Black, queer organizers who shut down the Bay Bridge in January made active connections between the revenue generated for the city by the Super Bowl, and the need to interrupt its flow. An advocate for Black power would have refused to perform, help shut down the event, or raise up the demands of community. Instead—I don’t at all doubt—Beyoncé was invited in no small part to dissuade the protests city officials feared would disrupt the event.

16. Beyoncé is light-skinned, skinny, cis, has a whole fleet of make up artists, personal trainers and professional photographers. Her team has relied on white passing to bolster her image before, and ‘Formation’ had plenty of its own colorism issues. You don’t need her to tell you to love your nose.

17. Beyoncé is rumored to be in final negotiations to perform in Tel Aviv, even as a growing number of Black musicians, actors and writers refuse to appear in Israel in solidarity with the people of Palestine. This possibility is in no way incongruous with Beyoncé’s political past–including her halftime performance. It should not surprise anyone.

18. If I learned one thing this week, it is that we are starving to see ourselves in power. We yearn to celebrate the vision of it–even when we know it is a ploy, a hologram. Our hunger, no matter how potent, no matter how righteous, cannot transfigure pop stars into revolutionaries. It cannot supplement community power with what it manages to extract from corporate media.

19. In no way is this pop cultural propaganda about an artists’ political growth, for Beyoncé is not an actual artist. It is about corporations finding creative ways to profit off a popular movement. It is an affront to Black organizing, and an offensive caricature of our history.

20. The state has many tools to break up a movement. Scripted messaging and infiltration are key ones. If we invite corporations to take over our movements, look to network television to instruct us in our successes, we give up our power without so much as a fight. We hand it over to the exact bodies that are trying to destroy it.

22. You–not her–are the Black visionary, the budding potential for revolution.

123 responses to “My (Apparently) Obligatory Response to ‘Formation’: In List Form”