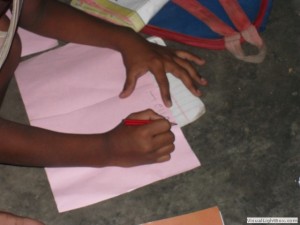 We need an education which is created collectively, and speaks to each learning community's specific needs.

This past week at my school saw much of the pageantry and lead-up which precedes the Thanksgiving recesses in so many U.S. learning communities. The hallways were filled with handprint turkeys, and almost every classroom was engaged in some discussion of the encounter between European and Native Peoples which occurred sometime in the early 17th Century. As a teacher-in-training, I had the opportunity to observe and even lead some of these discussions at various moments. While some of the lessons were more nuanced and radical than others, participating in so many of them in the course of only a few days left me with a significant question to reflect on: How do we construct the ‘we’ of our learning communities, and how are state-sanctioned events and holidays key tools in the forging of that construction?

In the kindergarten class in which I tutor, the students were asked to draw pictures of the things they were thankful for. A list of the words they had come up with–my dog, my cat, my toys, my family–were written on a board for them to copy under their drawings, giving them extra practice with learning their letters. When the students gathered on the rug to show the drawings they had worked on, the teacher asked some students to explain what it was they were thankful for. One student shared that they were thankful for their house, another for the food they would be eating on thanksgiving day. At this the teacher remarked, “That’s right. There are children in other countries who don’t have enough to eat, or places to live. Some children in other places have to work when they are young and don’t even get to go to school. We should all be very thankful that we do have those opportunities.” This pronouncement shocked me, not only because I had hoped that we were past teaching such generalizing and misguided views on the global community, but also because I knew for a fact that there were children in that very class, sitting on that rug, who had come to school that day from homeless shelters, who did not have enough to eat in their houses, who had been born in other countries themselves, and whose family members had not completed school out of economic obligation. That the common ‘we’ of that space should erase them and their lives so completely was something I was unprepared for.

In another classroom with older students, I sat in on a more complex discussion about Native perspectives on the holiday of Thanksgiving. Here the students were led in a lesson aimed specifically at disarming the bread-breaking myths so often told around the holiday’s inception, and understanding the event’s legacy as one which marks the beginning of a genocide–not a friendship–and which is cause for mourning in many oppressed communities. Yet even in the midst of this conversation, through which the teacher adeptly drew on student’s own knowledge while simultaneously challenging their thinking, he remarked, “Native people had been living on this continent for generations before we arrived, ultimately bringing our religion and government.” And, while I had deeply appreciated this educator’s careful and questioning approach to a grossly simplified history, it gave me a strange sensation to be told how Native Peoples had lived before our arrival, knowing that I (and surely many of the other kids in the class) had Native ancestors. And as the descendent of African slaves and other colonized peoples, whose religion and whose government, I wanted to ask, did the British settlers ultimately bring with them to the soon-to-be colonies?

In both of these cases, the ‘we’ of the classroom was not merely a question of syntax or semantics. It was a carefully constructed (or at least unquestioned) model of who that learning was compromised of–a way of normalizing, simplifying and regulating what stories and experiences were allowed to exist there. In both examples, once the ‘we’ model had been produced, it was used to co-construct a ‘them,’ first in the children of other geographic locations, then in the Native Peoples of the Americas. Instead of being used to paint a complex and capacious illustration of our learning community, it was used to erase the stories and perspectives of poor and working people, to deny the inequities and imbalances in our immediate locale, make invisible our own complex racial histories and identities, and to imagine Native cultures and communities as time-frozen, agency-lacking, and dead to our current moment. Above all, it imagined students and teachers alike as completely complicit within each of those myths–locked into gratitude for the supposed opportunities they lorded over others–and given no chance to question the master’s narrative, or to examine their own accountability in our current model of the world.

“Who are we?” is a question that does not go unasked in many learning communities, and is often a part of the first assignment or class project at the beginning of a new quarter. The answer to the question is often related to the melding of individual identities into a melting-pot kind of vision for the classroom, painting it as a uniquely colorful space. This is exactly the kind of construction of ‘we’ that I believe must be challenged. As we attempt to encourage our students to think more critically, we have to present them with more complicated and critical questions, and there is no better place to begin than with trying to understand what makes our learning community what it is: Who are our people? What communities do we belong to? What, as learners, is our obligation to those communities? What experiences do we represent that cannot easily be seen by glancing at us? Who is missing from/who is silenced by our ‘we’? Who benefits from their being left out?

Each learning community becomes empowered by determining what its specific terms are, then insisting that it be addressed on those terms, engaged in the questions which it deems most pertinent and necessary for its own survival. These terms can only be found through a real and a radical discussion about who that learning community is comprised of, and what the specific needs of its ‘we’ are. A radical education requires that we define our ‘we’ with intent and honesty, and do so with the clear goal of illuminating oppressed histories, not watering them down.

This piece was also featured as a guest post at Cooperative Catalyst.