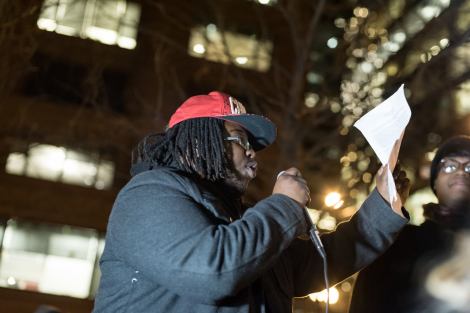 On March 3rd, 2017 in Chicago, IL, the Trans Liberation Collective in conjunction with Brave Space Alliance, BTGNC Collective, Black Lives Matter Chicago and the Trans United Fund hosted a historic Trans Liberation March. The event was both a protest of anti-trans laws profited by the Trump administration, as well as a response to the recent rise in trans murders–especially of Black trans women–in Chicago and elsewhere.

An estimated 2,000 protesters showed out, representing trans and queer identities from across the gender spectrum, and around the world. Speakers included trans folks from undocumented, Muslim, Black, disabled, indigenous, formerly-incarcerated, Jewish, sex-working, Asian and Latinx communities, and many more.

At the culminating rally on Federal Plaza, writer and activist Xavier Danae MaaTra–also known as Dirty Art Boi–a Black, queer, trans man and member of the BTGNC Collective, gave one of the final speeches. Below are the stirring words with which he helped to close the march:

Hello beautiful people. My name is Xavier–most people call me X–and you can find me online at Dirty Art Boi. I wanted to take a moment…

A moment for those who walk around between and above genders. A moment of silence for innocent bloodshed, spilled by those simply trying to be who they are. This moment is for those of us whose ability to be true to self is a matter of life and death. For those of us who know life is more than the need to check ‘male’ or ‘female’. To those who walk among you with love, pride, and respect, though our contribution to the spectrum of humanity is often misunderstood, neglected, and abused.

Thank you to all the family and allies whose love, pride and respect isn’t dependent on our ability to fit into societies’ boxes. Much gratitude to those who made the path a bit easier for me, and much appreciation to the ancestors who still hold us up today.

I want to share a few of my thoughts about liberation, because too often ideas about trans rights and trans liberation don’t include my experience as a trans, queer, Black man.

My liberation is not Marriage Equality. There are many privileges built into marriage in America that all people should have access to, if they so choose. However, the way the fight for marriage has been waged is a backdoor struggle for access to the status quo, not a challenge to how problematic it is to tie privileges to an institution that’s not for everyone.

Marriage equality fails to address many major issues. It doesn’t get to the root of why Black tgnc people continue to suffer from the highest rates of poverty, unemployment, incarceration, and hate-motivated violence.

My liberation is not progressive politics, liberalism, reformist politics, choosing between the lesser of two evils, or participation in any process that allows the U.S. government to masquerade as a civil society.  My liberation doesn’t support xenophobia, Islamophobia, and the demonizing and detaining of refugees and immigrants this current administration is reviving. We have to build a new society, to stop pretending like this ship isn’t sinking, and to stop scurrying for crumbs from capitalists’ tables while licking the wounds from the oppression that holds those tables together.

There is no such thing as justice in a corrupt society driven by profit over people. I am not surprised by the recent resurgence of white, Christian nationalism, and xenophobia on which Trump road into office. This has always been apart of the DNA of American culture. My people have been at war with these types of people for hundreds of years, and I refuse to have the nuance of my struggle as a trans and queer person be dismissed and left out of our visions of Black liberation, and the liberation of all oppressed people across the world.

My liberation is not money or participating in capitalism, assimilation, or the so-called American Dream. My choice to transition medically isn’t about blending in, or proving I can be someone else’s definition of normal. Many of the issues I face are driven by the disastrous impacts of capitalism and classism in this country.

In other words: Fuck your dirty notes and fiat currency. Fuck working for those who hate us in order to survive. My liberation means the end of having to give the majority of our physical and creative energy working in institutions that are designed to exploit our labor and pit us against each other.

My liberation is not equality or having enough privilege to assimilate into white supremacist power structures and binaries.  Unlike too many celebrity- and status-quo-chasing people, the goal of my transition and gender expression is not to find a place amongst wealthy elites. I don’t want to be equal to white people, the so-called average American–cis, heteronormative, blah, blah, blah, nor any other privileged person in society.  I want to build new ways of relating to and valuing life that’s not dripping with the blood of oppression and funded by the dirty American dollar. Equity, not equality, is essential to trans liberation.

As for this current round of anti-trans legislation and the bathroom conversation:

The way they are framing this discussion is backwards. If people only understood how hard it is to go to a public restroom as a trans or non-binary person. No matter how well you do or don’t ‘pass’, a trip to the toilet can be filled with anxiety, fear, and panic. I always feel unsafe in public restrooms. I try not to use them, and still plan my day around where it’s safe for me to pee. I stop by my office when I’m doing things in that neighborhood just so I can use a safe single-stall restroom all the time.

Many of us have been harassed and beaten in restrooms. I’ve been chased out of public restrooms when I was still trying to pass as a woman, and if I use a women’s restroom today someone will probably call the cops on me. I’m not a student, but I work with students and and faculty on campuses all the time. Which restroom is safe for me on campus?

Trump won’t enforce the law the way Obama did. There are practical things you can do to influence and resist how this current administration is choosing to enforce its laws. There are other ways you can resist this administration’s attempts at scapegoating and demonizing trans and gender-nonconforming people. Will you support a person when you see them being harassed for being trans or non-binary while walking down the street, or sitting on the train? What have you done to make your public schools, workplaces, and public restrooms more inclusive and safer for all genders?

Barriers to finding work because of gender are what impact our safety and ability to survive in this society just as much as, if not more than, being harassed in restrooms. What’s the point of being safe in the bathroom as a student if when you graduate you can’t find a job because another piece of legislation says a person can deny you access to services and goods because of your gender and sexuality? What are you doing to fight the 30 pieces of anti-LGBT legislation that are using the smokescreen of religious liberty to justify new forms of legalized discrimination? Are you, the children of those who fought and died for access to public spaces and employment, going to sit by and let this society continue to deny access to us because of our gender identities?

This isn’t just about the safety of students in restrooms. This is about our right to not fit easily into boxes labeled ‘male’ or ‘female’, and to walk through this world with dignity while doing so. This is about our humanity. It’s about our right to express ourselves freely in public spaces alongside anyone else, without fearing for our safety. It’s about fair access to the same spaces we help build and pay taxes to maintain. Our differences in gender identity and expressions don’t mean we are deviant, and we will not continue to be dehumanized, denied access, criminalized, and killed without a fight.

Black Trans Lives Matter. My life matters. The lives of my sisters being ripped away too soon in these streets matter. My often demonized, overlooked, and misjudged masculine brothers and sisters matter. My non-binary, gender-fluid peeps are essential as well.

I’m so grateful for those who lived these magical lives under the trans umbrella before me, and who helped me find the strength to live my truth and fight everyday with love of self, no matter how much this world tries to dismiss and punish us for refusing to fit into their boxes. We are beautiful and powerful as we move amongst the many complicated faces of this thing called humanity.

Peace, blessings, and all power to the people!

Republished with permission from the author