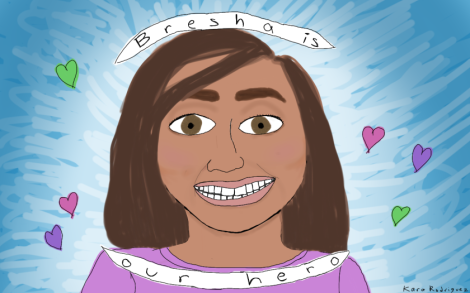 Portrait of Bresha Meadows, a 15 year-old survivor of family-based violence, by Kara Rodriguez.

This piece was cowritten with Kelly Hayes of Transformative Spaces.

Bresha Meadows was just 14 years old when she shot her father, Jonathan Meadows, as he slept in the family’s living room in Warren, Ohio.

Family members attest that Bresha’s mother, Brandi, and her two siblings had endured years of abuse from their husband and father. Bresha herself ran away from home multiple times, and is quoted in police reports prior to Jonathan Meadows’ death saying she “feared for her life.”

Since the shooting occurred last July, Bresha has been living behind bars, facing aggravated murder charges. She passed her fifteenth birthday in jail, just weeks after her arrest, and has been on suicide watch on multiple occasions.

The news came this past week that Bresha’s case would be continued in juvenile court, and that she would not be tried as an adult—a prospect that had been up in the air these past months, and which could have resulted in a life sentence. The announcement was deservedly celebrated, but, sadly, Bresha’s trial, her time in lockup, and the fight to see her freed are all far from finished.

Bresha’s case is significant—and deserves our full attention in the next, crucial months— not merely because of the travesty being perpetrated against a 15 year-old Black girl it represents. The case thoroughly illustrates how wholly ill-equipt the criminal justice system is to provide any real support for survivors of abuse–a shortcoming that overwhelmingly results in the further punishment of survivors.

Legal Prospects and the Myth of Survivor Support

Since threats to try Bresha as an adult have been abandoned by the state, her attorney, Ian Friedman, has stated: “This doesn’t change our position that this was a self-defense scenario and we will press on with our effort to get Bresha home with her family right away.” This is a thrilling new development. Yet as her defense makes important steps in the direction of her freedom, Bresha remains in a cage. She will not be home for Christmas, cannot celebrate the news that she will not spend the rest of her life in prison with the family she so bravely defended.

Bresha and her family are truly deserving of healing, yet it is unlikely that such healing can come from any tentacle of the carceral system. It is next to impossible that true healing can result from anything short of Bresha being actually, truthfully set free.

There is a long, degrading legacy of women and girls—specifically those who are of color, trans and queer, sex workers and survivors of abuse—being legally coerced into ill-fitted and poorly-funded psychiatric facilities. This has historically been offered as an alternative to incarceration, and even an answer to overcoming trauma. Yet the result has been the pathologizing of resistance, self-determination and self-defense, and the punishing of women and girls who fight back on their own terms. In these institutions, obedience is read as health, which means oppressed women and girls tend to be automatically branded as unstable. Even more unsettling, because time spent in these facilities is classified as “treatment,” there is often no clear release date as there is when one is serving an actual prison sentence.

Traditional psychiatric treatment, mandated by the courts, has, up to this point, only been incarceration by a different name. This is why it is imperative we fight for real freedom, total decarceration, for Bresha.

Statistically speaking, there is a direct relationship between the length of a defendant’s pretrial detention and the likelihood of a conviction. In addition to Bresha’s current confinement being unjust and inhumane, it is actually a threat to her long term freedom. It points to a desire on the legal system’s part to condemn her, as keeping her caged these many months has already served to do. This is why any verdict other than ‘not guilty’ is likely to result in her further confinement—be it under the guise of healing or no.

On a deeper level, it is foolish to entrust the healing of women and girls of color to a system which shows such violent disregard for their lives and families. We have to remember that no outcome in court, no matter how preferred, is what justice looks like.

Justice, or the closest thing to it, would be Bresha, her mother and siblings having the real chance to heal, and being met with the support they need to live happy, self-determined lives. It would also require all of us to hold the system–and ourselves–accountable for the fact that Bresha was not heard until a gunshot rang out.

Bresha did everything she was supposed to do—the exact things we often unfairly demand of survivors: She talked to police and worked with the courts; She cried for help and even ran for her life. Bresha did not fail society by violating its legal rules and norms. The social order failed Bresha. And we should all be made to answer for that.

We need to understand the bigger picture: Black women and girls are seen as having no selves to defend, their lives unworthy of being fought for. For this reason, acts of resistance—those with no social value taking violent measures to protect themselves and each other—are always seen by the legal system as audacious.

The criminalization of survival for marginalized people can be viewed on a macro level in the movements that are propelling justice in our times–#NoDAPL and the Movement for Black Lives, to name a few. But we also have to be accountable to individuals like Bresha, Naomi Freeman, and all women who are punished for saving their own lives. We must be accountable to the families of people like Loreal Tsingine and Korryn Gaines, whose loved ones were seen as unworthy of protection.

Approximately 84% of girls in the juvenile detention system are survivors of family-based violence. That rate is even higher in adult prisons. This tells us two crucial things: Firstly, the prison system punishes survivors, especially when they are women and girls of color, poor, trans, and queer. Secondly, incarceration contributes to violence by creating new trauma for those who are already in need of healing.

It should be clear to everyone by now that US prisons are, fundamentally, profit-driven holding tanks for our failures as a society, containers for the necessary casualties of free market capitalism. Mass incarceration has done nothing to make our communities any safer, nor to “rehabilitate” the incarcerated. It’s past time for us to take an honest look at what this system is doing to the people it consumes—most of whom were living in the margins long before they were locked up.

The United States branded some of us as less worthy of survival, or totally undeserving of it, centuries before this country ever gave itself a name. That branding manifests itself every day, and must be fought at every turn. The prison system is one of the core institutions which upholds and enforces the unworthiness of Black people, poor people, Native people, women, trans and queer folks. Freedom for Bresha, and for survivors not just of family-based abuse, but of genocide, slavery, austerity, transphobia and racism, means its permanent abolition.

Looking forward, there are several ways people can offer Bresha immediate support. The most important is to keep up with news and updates about Bresha’s case and make sure that her story isn’t lost in the media shuffle between court dates. Regular updates can be found on the defense committee’s website. There is also a petition demanding her immediate release–which already has more than 24,000 signatures–that can be signed and shared.

Bresha won’t be back in court until January 20, and it’s imperative that we don’t let people forget her struggle or her name. In Chicago, the Lifted Voices Collective will be staging a direct action outside the Cook County juvenile detention center on December 15, to lift up Bresha’s name, and show solidarity with incarcerated youth there and elsewhere. Come out to actions in honor of Bresha if you are able, and consider organizing an action to draw attention to her next court date in your own area.

Finally, there is a letter writing campaign to speak directly to Bresha as she waits out her time in lock up. If you want to provide words of affirmation and empowerment, postmark letters to the address provided here, and check out the other resources on the #FreeBresha website regarding curriculum, artwork and info that can support you or your organization in fighting for Bresha.

Lifted Voices, which will host the action for Bresha in Chicago next week, has a saying: “Our dreams will empty cages.” In the case of Bresha Meadows, as with all those incarcerated, this refrain isn’t merely a hope, but a directive.  There can be no justice without abolition, and freedom is unavoidably built from a place of love. Justice for Bresha is only possible once she is freed, reunited with her family, and able to determine with them what the next steps of their own healing process should look like.

Help bring her home. Help bring all our people home.