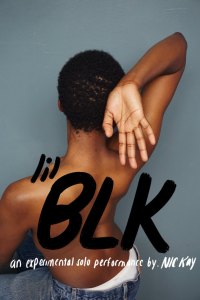 In the spirit of the Black Arts Movement reimagined in the era of Black Lives Matter, lil BLK, a solo performance by Nic Kay which premiered last weekend at Links Hall in Chicago, creates itself within the confines of the traditional dance and studio art worlds without responding to them.

Drawing from sources like praise dance, vogue chants, performance art, house DJaying and spoken word, the forty minute piece is at times an autobiographical account of the artist’s growing up queer, Black and gender-nonconforming in the Bronx, at others a frenetic, meditative, and cathartic ritual, the worship of body, ancestry and survival.

The stage at Links Hall is essentially a white box theater, with folding chairs along two of its walls. On Sunday night it was packed with a larger number of queer, Black and Brown folk than tend to patronize a gallery or modern dance venue in an entire season. An industrial fan, a microphone, a few exposed lightbulbs and a hanging clothes rack with sheer white costumes were the only set props as the audience entered to a hard house track.

Opening with a chopped and screwed vogue beat sampling LaWanda Page from RuPaul’s dance classic Supermodel (“Once upon a time…there was a little Black girl…”), the piece begins light, and with a clear chronology. Kay cat-crawls onto the stage, their arched back shadowed on the white wall behind them, in booty shorts and knee pads. With a blaring voiceover of 3 year-old Payton Jackson reading Countee Cullen’s “Hey Black Child,” Kay acts out the poem with literal, wheeling motions.

After creating a lopsided get lite soundscape in real time with a voice looper, and giving the crowd a tutorial on how to win a family barbecue dance contest, the piece takes a turn from the deliberate to the testimonial.

In the style of a bedtime prayer, Kay tells the story of their early attractions and first loves. Asking the ceiling, “Why does everything that makes me feel whole take me further away from my family, further away from you?” Kay begins a slow, beseeching dance sequence to Donnie McClurkin’s Great Is Your Mercy. The moment is instantly recognizable to anyone who has spent time in a modern Black church, but is offset by Kay’s sheer top, booty shorts and exposed belly. The sexual and spiritual performance is not confused, but trying to hold the contradictions of religion and desire, of queer love that is rooted in a community that rejects it.

The dance is epic, and painful because you know the mercy for which the gospel singer gives praise has yet to be bestowed on the dancer. The movements become a yearning prayer in themselves.

A runway beat drops, and Kay changes outfits center stage, getting nude and holding poses. In the style of a vogue commentator, they begin a repetitive chant,

confronting the audience with their naked form and multifold gender. Their words turn from their own form to that of the theater:

Instantly, you imagine how differently these lines might have fallen on previous nights when the crowd was full of funders and grant writers. Yet even as Kay bluntly addresses white consumption of their art, the lines are clearly not written for white audience members. Acknowledging the contradiction of making Black art in a white hall, Kay speaks to the comodification and alienation inherent to the Black experience of capitalism. In confronting whiteness, they speak distinctly to Black audience members.

For a few minutes, the piece loses itself in some of its own tech and drama, but picks up again as Kay reenacts a club night. Standing directly in front of the large floor fan, under dark red lighting, the mood is more basement punk show than dance piece. Kay is bare-chested, with a white rag on their head. They sing along word for word with George Kranz’s Din Daa Daa, a cornerstone track for both bboy’s and voguers. When the last trill of the vocals end, Kay drops the mic and begins to run in rhythmic circles around the entire stage. Giving you Garnett and Grace Jones at the same time, the artist transforms themselves impossibly into a new species of dancer.

What could be trite or redundant is riveting. Kay goes into a trance and the audience follows. This is where their work is its most imaginative, and the observer feels like she is witnessing a genuinely new kind of performance.

After telling the story of their night out to a departed friend somewhere off stage, Kay lipsyncs the ending runs of Patti Labelle’s Somewhere Over the Rainbow, in the perfect style of a drag queen singing for coins. The reference is not lost, and movingly executed.

In the closing number, Kay reads off a smiling, shouted affirmation for little Black girls (“You are the shit!”) and as the final house song builds, begins a last chant:

Somewhere in the middle, Kay goes over to the voice looper and presses a button which distorts their voice to a Kanye-style autotune. At first the choice seems ironic, and a few audience members even laugh. But as the chant progresses, the sharp notes become harsh, and Kay full-body dips, throwing their head back onto the floor, straining their voice into the mic:

Genocide, police violence, and the disappearance of Black communities, voices, and bodies are suddenly ugly in the room. You can feel Black life being choked out around you, as Kay chokes on their own words. When the lights come up, the audience is moved and devastated.

Aspects of the piece criticized by the Chicago Tribune as “didactic” and “not hard to read” show a commitment on the artist’s part to accessibility–a concept still synonymous in the Eurocentric (and ableist) art world with laziness. Kay expertly draws on the most recognizable elements of Black, queer performance, doing them justice, honoring each of them with reverence, while effortlessly presenting them in unrecognizable reincarnations. This is no small feat, and demonstrates a creative expertise that is both genre bending and builds off a clear lineage of Black, trans artistry from the street to the stage. This was unmistakable to audience members versed in these traditions.

Ironically, what is purposely geared towards Black, queer and gender non-conforming viewers is hard to read for the canonical art world. What is accessible to those of us who are usually locked out is esoteric to the critics, who instead of comprehending their own lack of tools, call a young artist unsophisticated.

To be unmoved by Kay’s work is to fail to understand not only its relevance to current events, but the power, significance and breath it provides a swelling push for Black, trans and queer freedom.

2 responses to “Profane and Sacred: A Review of lil BLK”