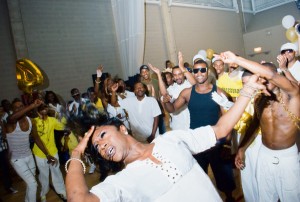 I began voguing as a high school student, drawn to the art form because I had so little support and community as a queer person of color in my hometown. Upon graduation I began visiting New York City regularly to practice and participate in the ballroom scene there. It was, significantly, b-boys from the hip hop dance community with which I was involved at that time, that first brought me to the scene, and connected me to the members of the house organization which I ultimately joined. Joining a house and becoming a committed participant of the scene was the first time in my life being a part of a larger network of queer, Brown people of a huge range of class backgrounds, gender and sexual identities. It was my first time working and learning in solidarity with trans folks, sex workers, homeless youth, and a host of other radical identities which call the ballroom scene home. From b-boying to voguing, and from my small town to an urban scene of Brown, queer, and economically oppressed people, my experience with this art form has been one of not merely my own self-empowerment, but of forging connections across multiple oppressed identities through the medium of movement.

As a new member of my house’s chapter here in Chicago, my housemates and I have spent a great deal of time discussing our own relationships to the ballroom scene, and how to best maintain and pass them on to new generations of working, poor, queer and Brown people. It is clear that there are too few spaces for queer people of color to congregate which are not controlled by other communities and organizations which do not represent us. Deep race, class and gender divisions exist within our own communities which also make building a foundation for the passing on of tradition difficult. The commonplace opportunities to teach vogue are often based on making it a commodity to outsiders–teaching it to students, professional dancers or others with the means to commodify it, and not to our own friends, neighbors, and those who share our oppressed identities. We have been struggling as to how to make a commitment to this tradition which means so much to us, which honors the people and communities which invented it, and works to hand it down within those same communities.

In trying to imagine this commitment and its concrete manifestation, the b-boy community of Chicago, much like the one I originally began dancing in, has been a great inspiration. In open gyms and community centers, b-girls and b-boys of multiple generations, styles and backgrounds gather together on a weekly basis to practice, cypher, build routines and share moves, usually without any designated structure or goal outside of upcoming battles and the sharpening of their own craft. A commitment not just to learning the dance moves but entering respectfully into a lineage of previous generations of dancers is an expectation of these spaces. The appreciation and admiration I have for this scene has helped me and other members of my house begin to envision the kind of space we dream for ourselves and new generations of our own dance scene.

In hopes of moving forward and organizing an open practice space for members of the ballroom community in Chicago, these are some of the initial commitments and goals that I and other members of my house have devised for a vogue practice space:

– Focused on passing on not only dance, but also the radical history of the ballroom scene itself, both past and present, locally and abroad

This list we hope to add to and edit with other members of the ballroom scene, and with any and all people which seek to share a creative/social space as a means of gathering oppressed communities and keeping alive our radical traditions.