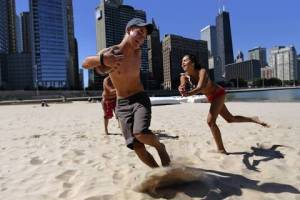 The Chicago Tribune’s depiction of student involvement in the Teachers’ Strike.

The Teachers’ Strike in Chicago has been on since Monday, with some talk today amongst union representatives and mainstream media that there may be a contract agreement reached as soon as the end of this week. With national attention being paid to the strike, and daily reports on the progress of negotiations in local papers, I have found that his is one of the first times in my life that I have been in the midst of an event receiving such extensive coverage. With that in mind, this has also been the first time I have been able to see so clearly how poorly the media reflect, report and engage the real questions, conflicts and actual events brought on by such a battle. I would like to challenge and discuss some of the mainstream sticking points–both against and in favor of the strike–which I feel are not being properly covered or critiqued by any mainstream media sources.

When a strike happens, children suffer – A nearly constant refrain in sound bites, expert opinions and voices of concerned parents is that when teachers walk off the job, it is their students who suffer as a result. While much of these opinions–and their expression in media–are in line with the standard practices in our current political climate of teacher bashing and the blaming of working people for the social and economic ills in their communities, they fail to paint an accurately nuanced depiction of the strike. They fail not merely to acknowledge the notable support with parents and students have been showing towards the strike, but also to interrogate which factors have actually caused the strike to happen. Children suffer when generations of violence and under-resourcing in their communities are expected to be handled by individual, overworked professionals. They suffer when that violence is the most proactive option for their own mobility–either in the form of local violence, or joining in with military violence on a global stage. They suffer when the only kind of education made available to them is insufficient, or else prepares them regimentally to become cogs in an economy that does not represent their wellbeing. They suffer when the criminalization of their communities is a higher priority then their education. They suffer when the rights of all workers are threatened, including their own working rights, those of their parents, their siblings, and of large percentages of their communities. They suffer when local resources are actively allocated away from public services and towards the interests of private business. Teachers understand all of these factors, and watch as they are played out in their schools, their professional lives, and in the lives of their students. A desire on their part to actively address all of these factors, and an investment in the lives of young people, are what have sparked the strike, and any critiques of it which fail to acknowledge the ways in which young people and their communities are already suffering ring hollow.

Teachers could have avoided the strike – The common notion that teachers could have and should have avoided striking falls under the concept of “accountability.” A buzz term in education reform meant to strengthen school performance, accountability really means policing the rights and restraining the abilities of teachers as working people, while using high stakes testing to make sure that they keep their students at the state-approved standard. A not even clandestine attempt to shape young people as competitive workers in the global market, this concept, just like the argument that teachers could have avoided the strike, holds all the wrong parties accountable. It leaves out the fact that though the Chicago Teachers Union has been working on planning and presenting their demands for months, it was two days before the scheduled beginning of the strike the first time any representatives from the School Board met with them, and that mayor Rahm Emanuel has yet to meet with them. Further more, it obscures the real reasons the Union has called a strike. Moreover, it obscures what the real fight is actually about. Teachers are not on strike as a result of their own lack of organization, or because they want more pay. (A 16% salary increase was one of the first and only demands on which a tentative agreement was reached some days ago.) Their demands are smaller class size, more nurses and social workers on staff, an elected school board which does not hold the mayor in its financial pocket, and teacher pay which is not based on the test results of students–a practice which discourages teachers from working with oppressed communities where there are a host of complicated factors keeping test scores low. These are the questions on the table, and it is indifference and strategic inaction on the part of the mayor’s office that made the strike inevitable.

Striking results in a downturn in student learning – This concern, stated by much of the media, business leaders, and some families and community members, not only has no conclusive evidence which can support it, even by the standards of the state and private sectors. It also misses the incredible learning that happens in a situation like a teachers’ strike. Students are seeing members of their communities model for them things which for many of them are rarely modeled; Taking huge personal risks to defend public rights and the interests of their communities; Standing up to and actively challenging those in positions of power and authority; Taking up a vocal and articulated political stance through self-determined political channels; The questioning of, rather than the resignation to, oppressive systems. Students on the ground, who are sizable in numbers, are learning how to organize, what the values and legacies of the labor movement are, how to build intergenerational solidarity, and the creativity required to sustain a social movement. They are seeing how messy and difficult political debates are when they happen in real time, amongst bodies that are deeply invested in their outcomes. What could be a more rich moment in which to learn?

The struggle of teachers is the struggle of the people – Many of those in support of the CTU and of the struggle of teachers have worked to connect the strike to other social issues and movements–the struggle for education as a human right, the fight to establish unions and workers’ rights, battles against privatization and corporate force, and many more. Where some supporters are less likely to be critical, I have found, is in asking which struggles are not being discussed, what is left out of the debates taking place between the Teachers’ Union and government offices. As exciting as it has been to see how many young people are actively involved in demonstrations and organizing in support of the Union, I have also seen and talked to many students who are upset or uninvested in the strike. What many of these young people have expressed is not support for the mayor’s office or the interests of big business, but an unwillingness to fight for an institution that they feel has done wrong by them in so many different ways. These criticisms have rarely been leveled at teachers–as those in the media almost inevitably are–but at the structure of school. These students and their positions point out that even schools which are better funded, have smaller class sizes and more support professionals on staff, are still not designed to address the social issues their communities face, or acknowledge the battles which they are already fighting outside of public education. While the voices of students have been virtually erased from mainstream media coverage of the strike, I would like to hear more voices of young and oppressed people who are critiquing the strike, just as I would like to hear more of those who are supporting it.

A professor in my graduate program recently and wisely stated that virtually every struggle that has occurred around public education in our society has arisen over the tension between the socialist ideals of an institution and the capitalist economy that it is designed to prepare its students for. How this tension exists in these questions, and the struggle of the Chicago Teachers’ Strike at large, I am invested in seeing played out as the battle continues, negotiations are debated, and new questions arise.