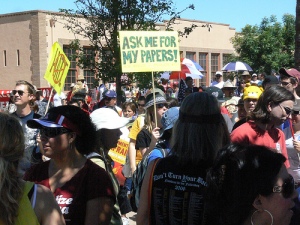 Linking the struggles of geographically mobile and economically mobile communities paints both in a whole new light.

My younger sister, a champion tennis player, was recently accepted to a college located in my father’s hometown–a development about which his whole family is ecstatic. My dad, a first generation college student, grew up poor in rural Massachusetts, and as a result has always seen formal education as the answer to the struggles of poverty. The other week, while driving home from work together, my dad told me in genuine wonder, “You know, when I was a kid we used to sneak onto those tennis courts to steal the balls that the students had left there. To us they were free toys, and it was unbelievable that someone could carelessly leave them behind. And to think that now, in just one generation, your sister is going to be playing on those same courts is astounding.” This memory, a real triumph in my father’s mind, made me sad. That our family should be celebrating a moment in which we were literally coming to occupy the position which had once stood as a symbol of excess and inequity to my young father was tragic. Yet, I had to remind myself, it is the very fact that I myself have never lived in poverty and take access to education for granted, which gives me the perspectives I have–which makes assimilation seem tragic rather than logical or necessary. Such is the nature of a mixed-class upbringing, and an economically mobile family.

Working for the past semester as a bilingual tutor in classrooms with a high number of Latin@ immigrant kids, I have been consistently engaged with young immigrants and their families, and have held special responsibilities in supporting and advocating for them within our larger school community. As a native English speaker and someone who has never experienced the stresses and traumas of immigration, this has often made me feel uncomfortable and unqualified. I have been at a loss on countless occasions, sometimes for necessary words and phrases, other times when my students have been battling with issues I have never had to contemplate–attempting to master a new language in addition to learning algebra, or being expected to stay on task while a parent sits in a deportation hearing. This steep learning curve has forced me to look regularly to my students, to friends, and to other members of my community to teach me more about their experiences as immigrants to the US. In these many conversations, I have been surprised to find the links between the experiences of my students and peers as first generation US residents and citizens, and my own as a first generation member of the US middle class.

At a family gathering over the recent holidays, my grandmother, aunts and uncles crowded into the kitchen, beaming at my younger sister. Each began listing off the names of friends and neighbors who were currently working at her soon-to-be college. Someone from my father’s old street was the head of sanitation, another was on cleaning staff, and another’s son was a groundskeeper. “You’re gonna be in good hands when you get up there,” one of my uncles said. “Everyone’s waiting for you, and gonna make sure that you get the best of everything.” The moment was a complex one, for while there was a real sense of pride in the room that someone from the neighborhood was about to be a student at the institution which had existed as a symbol of exclusivity for generations, it was also a grounding reminder of the huge class differences within our own family. It was a statement as to how opportunities have been inequitably distributed amongst sisters and brothers, how formal education has dismantled our community, and how each member of our family has come to read the same set of circumstances in vastly different ways. In other words, the moment was exemplary of the links between first generation experiences across geography and class.

There are a myriad of ways in which our experiences as members of geographically mobile and economically mobile communities overlap and inform one another. We are both forced to seek refuge within the very institutions which have generated the conditions from which we are escaping. As a result, we are made to act as a translators between fiercely opposing cultures. We are connected to multiple worlds, but often feel we have full citizenship in none of them. Our mobility is commonly the result of our taking advantage of available opportunities out of necessity, and not necessarily out of a desire to do so. Adjusting to our new environments, we can become products of a culture with which we do not identify, perceiving ourselves and our original communities from sharply different and sometimes disparaging vantage points. We have access to mediums and resources which others in our community do not. We experience jarring generation gaps, feeling estrangement from the very people who supported us in our mobility, and whom we are attempting to support. For me, linking the stories and perspectives of these two communities is radical, not only because it bonds two experiences which are not always understood as tied, but also because when these narratives are joined, they paint a complex portrait of struggles against institutions of cultural and economic hierarchy, rather than one of benign uplift, promise and hope.

Needless to say, there are innumerable ways in which the experiences of economically mobile and geographically mobile communities are starkly different. Issues of language, legal status, location and culture can effect immigrant communities in ways that they never do shifting class communities, and visa versa. A family moving from Mexico City to Queens, NY may experience a downward shift in class status, even as they attempt to find consistent work to support their relatives. A middle class person from a poor background, while they may feel judged and profiled often, does not have to worry about having their status revoked for failing to produce the proper papers. Yet there are plentiful and powerful ways in which these experiences are fundamentally linked. Noting these links isn’t simply about trying to understand one another better, but about advocating and fighting for one another better. It is about recognizing that all of our experiences take on new and more radical meaning when we understand them as being tied to global systems of inequity and domination, and having the ability to bind us together when many camps might hope to divide us. When we learn to view ourselves and our communities as ravaged by the same bodies and institutions which we have come to be dependent on, we see that we must challenge them instead of pledging our allegiance. With this realization, we come one step closer to devising the ways in which our many communities can learn to work in unison to dismantle empire and build up something more just in its place.

Special thanks to Aisha Jordan-Jerome and The Peace Poets.