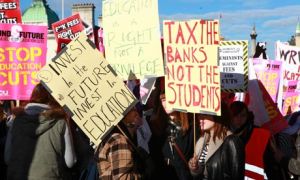 Justice is not going to come simply because we work harder.

A close friend of mine recently quit her job with NYC Teaching Fellows after sticking with the program for three full years. Teaching Fellows, which is a national organization, places aspiring educators–many of whom are young, recent college graduates–in classrooms within the most in-need urban school districts, while simultaneously enrolling them in subsidized masters of education programs. My friend, who was originally expected by the strictures of the program to complete her masters within her first two years of teaching, spread her courses out over an extra year, seeing how many of the other members of her original cohort of teachers were suffering mental and emotional breakdowns due to the intense amount of work placed on them. Even with the extra year in her masters program, she still left NYCTF without completing her degree. During her stint as a fellow, I visited her classroom in the Bronx, NY several times. She was–and is–an incredible educator, who engaged and managed her class expertly, going above and beyond the curriculum to get students debating about race, immigration, language and economics. In the end, however, the incredible amount of stress generated from running a classroom while taking graduate classes, and interfacing with the Department of Education and the conservative administrators of her program, was taking such a toll on her health and sanity that leaving NYCTF seemed the only way to preserve her physical and mental well-being.

Teaching Fellows is one model for urban education of which their are innumerable copies, all focusing on putting young and inexperienced teachers in some of the most demanding learning environments in the country, while at the exact same time expecting them to earn a masters degree. The idea behind this model is that it gets large numbers of new teachers credentialed and in the field as quickly as possible, and pays for their masters as incentive for the bumpy ride. This model, however, is totally unsustainable. The first year in the classroom–as I have heard teachers from a wide range of backgrounds describe it–is the hardest one for any educator in an type of classroom, as the most basic skills which might be taken for granted by experienced teachers must be learned by emerging educators. Add to this the fact that urban schools are traditionally underfunded and under-resourced, that students may be dealing with particular learning and emotional difficulties for which there is no structural support, and that a poorly-supported district may result in classes of students with huge ranges of academic abilities, including their grasp of language and communication. This situation, a reality in many urban school districts, would be difficult for even the most expert and venerable educator to balance single-handedly. Expecting young, inexperienced, and usually untrained teachers (my friend told me that NYCTF had never taught her how to make a lesson plan) to effectively navigate the teaching of such a classroom is almost ludicrous. That they should then be additionally expected to earn a masters degree at the same time is, to put it lightly, a recipe for burnout. How did this become the predominate model in urban education? Why do suffering schools and aspiring teachers remain in line with so many of these programs?

The intense realities of urban schools and classrooms are the result of the intense realities of the lives of poor, brown, working and immigrant urban communities. Programs like Teaching Fellows, Teach For America and other urban education programs with similar or identical models, promote the idea that young teachers who are the high-performing graduates of elite schools should somehow have the power to manage the inequities in their classrooms and “turn around” whole school systems. These programs and their leaders chant “no excuses,” a mantra which we find really means that if teachers (workers) and their students (oppressed and deprived urban communities) would just try harder, spend more hours of the day in school, and get higher test scores, we would suddenly obtain a just education system and an equitable society. These programs, and the steep demands they make of the teachers and learning communities they come into contact with, do nothing to challenge the economic orders which generate inequity, nor do they hold accountable the individuals, groups and bodies which violently extract opportunities and resources away from oppressed communities. In fact, quite the opposite is true: Many of the major urban education organizations are directly funded by corporations, investors and other wealthy private bodies with some of the most heinous corporate records on the planet–see Teach For America’s donor list. How did the responsibility for justice come to rest squarely on the shoulders of working and poor people, with none whatsoever being dealt to the obscenely wealthy bodies which have themselves engendered the inequities with which oppressed communities wrestle?

My friend’s story of burnout with NYCTF is not an isolated one. For one thing, it is commonplace for young, urban educators to only be able to sustain their intense efforts in the classroom for a few years–a model which is, in fact, beneficial to the groups which hope to create an easily-managed and non-unionized teaching force. Yet more than that, it is indicative of a system which despises the working and poor, and expects them to pay their own tab without ever asking how they ended up in the economic straights in which they find themselves, or demanding those who put them there be the ones to pay up. Justice will not come from oppressed people working harder, with young college graduates cracking the whip. Resisting these unsustainable teaching models is not merely about maintaining the health and mental well-being of teachers, but about fighting for real justice in oppressed communities, demanding forcefully that public education be recognized as a human right to which all people need equal access, and that the resources controlled by the extremely wealthy and powerful be redistributed immediately. We as teachers and members of oppressed communities need to riot against corporate force, connect public education to economic justice, and burn out the wealthy, instead of the other way around.

One response to “Burning Out: Demanding a Sustainable Teaching Model”